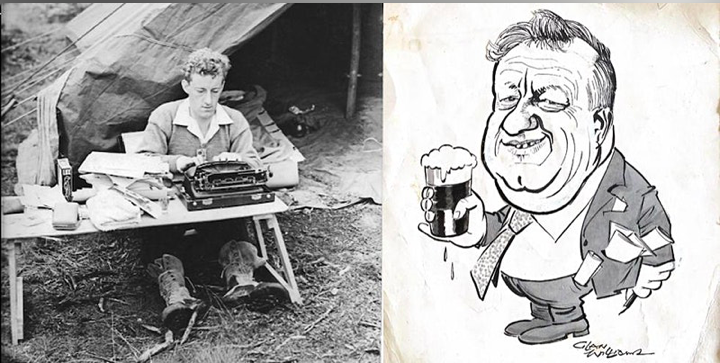 Chris Moncrieff (1931 to 2019) who lived locally in Hale End Road from 1962 until his death, was a political reporter who covered many significant stories whilst working for the Press Association. Described as both a ‘Fleet Street legend’ and ‘national treasure’ the House of Commons press bar was named ‘Moncrieffs’ in his honour in 2007.

At the press gallery’s bicentenary dinner in 2003, then prime minister Tony Blair described Moncrieff as “the gateway to the nation”.

Sir Nicholas Winterton (then) MP said about him in 2006: “To me, the best journalist in this place is the oldest journalist, Chris Moncrieff. You tell him something; he reports it; he does not dress it up; he actually reports. … Chris Moncrieff is the straightest man you could ever come across.”

On Moncrieff’s death on 22 November 2019 Alistair Campbell tweeted: “Probably filed more political stories than anyone in the history of political journalism. Liked by everyone. Trusted to be fair and straight by everyone. And nobody in the Westminster press corps ever worked harder. Sad day.”

This talk by his eldest daughter Joanna, tells the story of his life via images found whilst clearing the family home. Joanna will also include local stories that had his mark on them, such as his suggestion for local cows to be painted with luminous paint.

Joanna Moncrieff has been leading guided walks and more recently virtual tours in the West End, Clerkenwell & Islington and Walthamstow and Chingford since 2009. Her walks are mostly off the beaten track taking in hidden alleyways and lesser known streets.

Follow Chingford Historical Society on Eventbrite to be notified when tickets go on sale for future events.

This and future talks hosted by Chingford Historical Society will incur a £3 charge for non-members. Annual membership is just £10 per person or £15 for two at the same address.

Existing members will be emailed with details of how to obtain a free ticket nearer the time.

Chingford Historical Society is a registered charity (Charity number: 281623) and all proceeds from the sale of tickets minus Eventbrite fees will go direct to the charity.